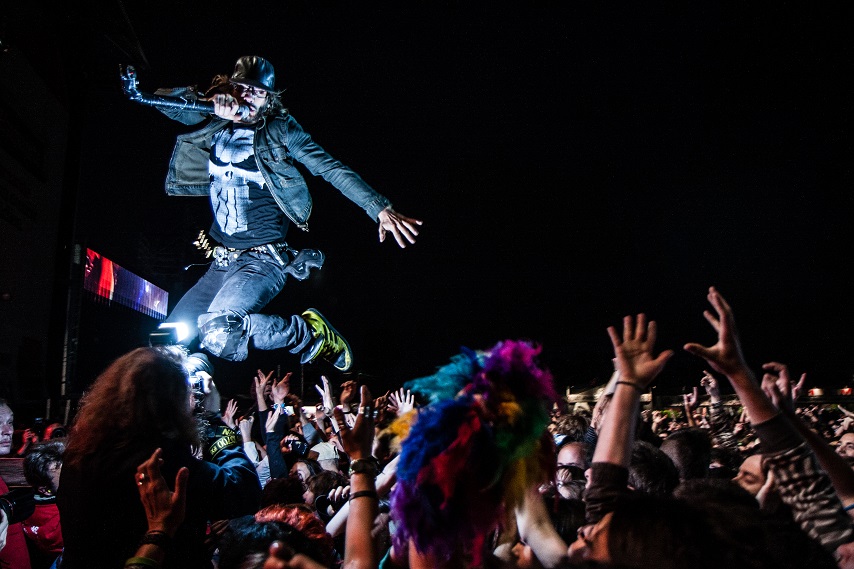 Chamonix is known as the birthplace of modern ski mountaineering, but now it’s become an iconic gathering spot of a different kind too… the kind that likes to party! And there’s no better time to get involved than for the April music festivals in Chamonix.

Since the first Winter Olympic Games in 1924 Chamonix has been renowned as the heart of alpinism in Europe and the host of a number of major international sporting events. Driven by the motivated director of the Tourist Office, Nicolas Durochat, Chamonix-Mont-Blanc has diversified its offerings to present you with a silver platter of inspiring cultural events. Nicolas believes that “like any major capital, Chamonix-Mont-Blanc has to renew its image and diversify with more festive and cultural offerings”.

Two of these cultural events fall in the month of April 2018 and are not to be missed!

In the first week of April, Chamonix Unlimited Festival is one of Chamonix’s most popular music festivals on the calendar. The team at ski company Black Crows transforms Chamonix into the epicentre of electronic music in the Alps. This year, the Chamonix-based business hosts its fourth annual Chamonix Unlimited Festival, a five-day celebration of electronic music and dance that draws thousands of fans to nine spectacular venues across the valley.

It all starts at Planpraz on Wednesday 4th April with the legendary open-air party at 2000m altitude. Then artists such as Paul Kalbrenner, Laurent Garnier and Amelie Lens have licence to take over the Plan Joran gondola station at Les Grands Montets and turn it into a 2,500-person concert venue on Thursday, Friday and Saturday respectively.

Meanwhile, hugely popular international vintage sound system Breakbot will fill Les Caves with the sound of daft-disco electro-pop on Thursday. Konstantin Sibold will then echo across the Mer de Glace from the Montenvers Station during an afternoon session on Friday. And that’s just the beginning! There are also events at the Aiguille du Midi, La Terrasse and Grands Montets chairlift La Herse.

“In France and in the Alps, we used to have a very strong ski culture, in the ’60s, ’70s, and ’80s. After that, we had so many big ski resorts, it became less about the culture. So as a ski brand, we wanted to bring more lifestyle back to skiing and of course, music and dancing. That’s just a part of life and it’s part of the DNA of our brand.”

The scheduled acts for the Aiguille du Midi event on Thursday 5th April are still to be announced and will only be confirmed depending on weather conditions (in case of bad weather the event will be held on Friday).

Fun Fact: You can discover the music of Paul Kalkbrenner on Netflix in the cult hit film ‘Berlin Calling’ [not suitable for children]. While the character of ‘Ikarus’ is not his own story, the soundtrack was recorded almost exclusively by Paul Kalkbrenner who was also the principal actor.

“Mobilise all the foreign communities of the valley around a strong ambition: that of becoming the closing destination of the ski season in the Alps.”

– Director of the Tourism Office of Chamonix, Nicolas Durochat

Each summer on the shores of Lake Bourget, Aix-les-Bains, Musilac attracts 80,000 rock and pop fans. This year Chamonix-Mont-Blanc and the Musilac crew present Musilac Mont Blanc a ‘spring’ edition to round off the ski season in Chamonix. It promises to be a great new addition to the calendar of April music festivals in Chamonix.

In the 15 previous editions of Musilac in Aix-les-Bains, the event founders have demonstrated their ability to build an amazing line-up and gather a crowd. (Discover some of the previous acts in our blog about the launch of Musilac Mont Blanc.) The quality pop-rock programming of our Chamonix “Musilac Rock and Ride” evolution is no exception to the rule…

There is something for everyone in the line-up of Musilac Mont Blanc with big Francophone acts such as Stephane Eicher, Orelsan, Shaka Ponk and IAM. For the international contingent in the valley, there’s also Beth Ditto, Texas, Ben Harper and Rag’n’Bone Man.

“The presence on 19th April of Stephan Eicher on the stage of Musilac is, of course, an asset to seduce an audience outside our borders. We have also held a press point in Switzerland, but also in Italy. ”

– Director of the Tourist Office of Chamonix, Nicolas Durochat

The festival will take place in the Bois du Bouchet, best known as a paragliding landing site, in central Chamonix. With a capacity to welcome 15,000 spectators each evening, the event will host 21 acts over three days from 19th to 21st April 2018. To allow for a full day of spring skiing on the slopes, the starting time of the concerts will be between 3pm and 4pm, and like Cinderella, over by midnight!

The lift pass company here in Chamonix, Compagnie Du Mont Blanc have also confirmed the extended season of the Brévent and Flégère areas to 22nd April 2018. Along with Les Grands Montets which closes as usual on 1st May, festival goers will be spoilt for choice as they “ride” then “rock” this spring.

Unlike the camping set-up of the summer event, for climate reasons, shuttles will be made available so that festival-goers can return to their homes as temperatures drop.

Fun Fact: You can see Chrysta Bell as part of the Musilac Mont Blanc line-up on Thursday 19th April from 17.10 BUT also on screen as ‘Tammy Preston’ in David Lynch’s latest season (3) of Twin Peaks:

That’s not all folks!

The local music scene here is not limited to these two April music festivals in Chamonix! There are ongoing regular music and dance events to light up your social life, including the après-ski. Chamonix All Year recommends you follow us on Facebook to keep up-to-date with exciting events going on in the valley. Also, we can’t resist a shout out for our favourite local choir group putting on on a show this 3rd April. Chambelles Bond Night 2018 – at the Mercure Chamonix Les Bossons will be a “Quantum of” music!

Featured image is of Shakaponk at the Fête de l’Humanité in 2012.