Via Ferrata in Chamonix: what you need

If you’re not an experienced rock climber, but you’re looking for the mental and physical challenge of climbing and the spectacular views that go with it, Via Ferrata in Chamonix is for you!

Chamonix is deservedly known as the heart of alpinism worldwide. With such fame and popularity comes investment and growth in a full range of accesses and activities to view and explore these Alps. In 2016, Chamonix added Via Ferrata to the long list of activities on offer. As this is a sport which is growing in popularity, the Via Ferrata course at La Flégère was built to serve the Chamonix valley. Previously, visitors to Chamonix have been able to experience Via Ferrata on the “Curalla” route in nearby Passy Mont Blanc (see below).

Via Ferrata is Italian for “iron way”, and has its roots in treacherous World War 1 border battles between the Austrian and Italian armies in the Dolomites circa 1915. It’s a cross between scrambling, hiking and climbing that requires very little equipment or experience. This is because, unlike actual climbing or bouldering, Via Ferrata is a series of metal rails, rungs and bridges embedded into the mountain along an easy to follow marked route; a great group activity that allows you to take on otherwise impassable ledges and cliffs.

Via Ferrata continued to grow in popularity in the 20th century: “New routes were mostly developed by the climbing community often with active involvement of one of the relevant Alpine Clubs.” As a way to encourage a more inclusive tourism offering and increase the range of commercial activities in the Alps, Via Ferrata blossomed further around 1990.

There are more than a hundred Via Ferrata courses in the French Alps; the first of its kind was installed in Freissinières in 1988. 28 years later in October 2016, the Chamonix valley joined the club presenting to the public its first commercial Via Ferrata course in La Flégère. Local newspaper Le Dauphine reported at the time (in French) that another course was being debated for Le Brévent, while the proposal for an Aiguille du Midi route was canned.

Via Ferrata in Chamonix

Accessible from the Téléphérique de la Flégère (which will be upgraded to a cable car ahead of winter 2019/20), your escapade d’escalade awaits! Once you exit the arrival building, your warm-up begins with an easy level hike to access the starting point of Via des Evettes, near the chairlift of the same name.

This Via Ferrata route is recommended for anyone with a reasonable level of fitness over the age of 13. It is split into two sections; the first part of the route features a spectacular Himalayan-style suspension bridge. The second part is more technical and requires cardio fitness and strength to manage the multiple ladder climbs. The overall course is graded as difficult.

Need to have – equipment

If you book to do this Via Ferrata in Chamonix with a guide, the below technical climbing and Via Ferrata equipment will be provided by your guide. Alternatively, if you have some experience of Via Ferrata and you’re confident about heading out on your own, you can rent the kit from many shops in the centre of Chamonix.

NOTE: As an additional security if venturing onto the Via Ferrata alone, you may choose to have a length of climbing rope and belay device on hand as part of your equipment.

Need to have – personal

During the Via Ferrata in Chamonix at Les Evettes, you will have spectacular views towards the Mer de Glace glacier and towering Aiguilles des Drus, as well as the famous Mont Blanc Massif and Aiguille du Midi. Make sure you bring your camera but don’t be disappointed if you are told to put it away during certain sections of the course!

Following your adventure, you will take a short walk back down to the Flégère mid-station (where you arrived in the cable car). However, if you don’t want to end the adventure there, you can hike to Lac Blanc (1 hour 15 mins). Bear in mind that currently (Summer 2018) you may discover the refuge at Lac Blanc closed due to a current legal battle, therefore make sure you are prepared with your own food and water.

Emily Woodhouse from RedBull has some handy insider intel about setting off on a Via Ferrata here:

Most Via Ferratas have only one set route that takes you from start to finish. Although this makes navigation easy, it also leaves you stuck on the route once you’ve started. Some guidebooks will offer escape routes, but many don’t. The only way off is back down and all the people coming the other way won’t be very impressed. Similarly, there aren’t a lot of toilet spots on an exposed rocky edge…

Your group excursion booking with Chamonix All Year will take up to 5 hours to complete the course including safety demonstrations, gearing up, and snack breaks along the way. All of your technical and safety equipment, including helmets, is provided on site.

The price is 102€, which includes your equipment and lift pass if you don’t already have your summer Multipass. The meeting time is usually at 8.30am sharp at the base of the Flégère Telépherique, 10min from Chamonix by bus, car or train. Find out more about Via Ferrata in Chamonix and how to book.

Next steps: other Via Ferratas near Chamonix

If you enjoyed this course you can graduate to the course in nearby Passy named “Curalla”. The course is said to resemble vertical hiking, and should take between 1 hour 30 mins and 2 hours to complete. Access is via a 40-minute hike uphill from your starting point at the buvette (snack bar), where you can also rent equipment. The course is graded as difficult, and there are no entry or exit points along the way.

There is also a Via Ferrata course in Saint Gervais, which was newly opened in July 2018. The course is 2 hours 30 mins long, with 2 entry and exit points along the way if you wish to do a shorter activity, and gets more challenging as you progress. The first starting point for the entire course is at the thermal park in Saint Gervais-Le Fayet, with the second entry point also in the park via the footbridge which is located 51m above a water torrent. You can also exit at this footbridge if you only wish to complete the easier part of the course, or further along at the Saint Gervais bridge. Bring your own equipment for this route; there isn’t a rental shop at the start.

Note that the first section of this course is graded as fairly difficult, and the second and third sections as difficult, with several overhanging sections and good upper body strength required.

Book Via Ferrata in Chamonix

Contact the Compagnie des Guides de Chamonix or Evolution 2 to book your via ferrata activity – let them know you’re coming from Chamonix All Year when you book. 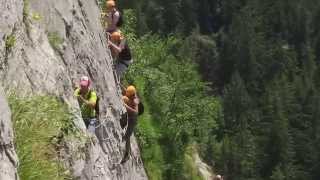