Chamonix is known for being a mecca for extreme sports in France and the high mountains of the Northern Alps offer a diverse range of activities. During your next holiday in Chamonix, you might have the opportunity to get up close and personal with some athletes as they undertake another exploit, or to try one for yourself. Read on for the lowdown on extreme sports in Chamonix.

Highlining is an extreme sport which involves balancing and walking along a length of strap / webbing, usually about 25mm wide. It is the extreme version of slacklining, due to the fact that the line is suspended at heady heights of at least 30m.

In the mountains, highlining is usually combined with other sports like climbing, mountaineering or base-jumping, as the line is often suspended in places that would be otherwise inaccessible. It’s a sport which requires physical balance and mental stability.

In Chamonix in May 2014, Tancrède Melet crossed an icy chasm in the Vallée Blanche on a highline, without any protection. The record for the longest highline walk is held by Jerry Miszewski, an American, who walked almost 214m at a height of 92m.

The highline doesn’t have to be attached to stationary objects either; the record for the highest ever highline is held by Andrew Lewis who walked between two hot air balloons at a height of 1200m!

If you fancy giving this a try, slacklining in one of Chamonix’s parks is a great way to start.

Wingsuiting is without a doubt one of the most extreme sports in Chamonix which people practise. A wingsuit is not dissimilar to the form of a flying squirrel, with “wings” of material stretched between hands and feet.

The sport was born in the 1930s, with the first wingsuits being made from canvas, wood and steel, but really “took off” in the 1990s as suits were developed by Patrick de Gayardon which inflated with the air pressure. The first wingsuit flights were done from aeroplanes.

In the Chamonix valley, wingsuiting is combined with base-jumping – the practice of jumping from a fixed point (in Chamonix, usually a mountain). After jumping, the wingsuiters then fly close to the side of the mountain, known as proximity flying, before opening a parachute for landing.

This sport is highly dangerous, but remains fascinating for wingsuiters and spectators alike. At the time of publishing, wingsuiting is forbidden in Chamonix valley, following a string of fatal accidents, although jumps are still permitted elsewhere in the Haute Savoie region. Who said Man couldn’t fly?

Chamonix’s terrain means that many sports are transformed into their most extreme versions, including trail-running and triathlons.

The UTMB® – Ultra Trail du Mont-Blanc is a whole week of trail races, the pinnacle of which is the mythical UTMB®, with its 10,000m of height gain across the length of the 171km course. The course follows the route of the hiking Tour du Mont Blanc, passing through 3 countries (France, Italy and Switzerland). Participants are capped at 2300 runners and if you’re lucky enough to get a place in the ballot with points earned on other ultra marathons, you’ll have to complete the course in a maximum of 47 hours. The best of the best will complete the UTMB® in 20-25 hours, like Kilian Jornet did in 2011 when he finished in 20 hours and 36 minutes, or Elisabeth Hawker who crossed the finish line in 25 hours and 2 minutes the same year. Find out more about the UTMB® in our quick guide »

The race usually takes place in the last week of August or first week of September. 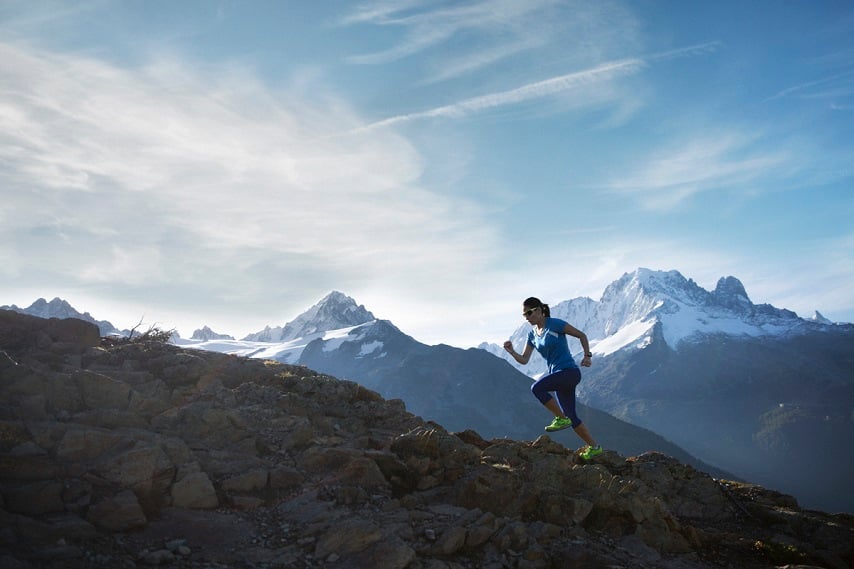 The Evergreen Endurance triathlons take place 1-2 weeks after the UTMB and include races which are iron-distance. The longest race is the Evergreen 228 which consists of a 4km swim, 190km cycle and a marathon trail run of 42km.

Along the length of the course, athletes will climb a total of 7850m which, when combined with the distance covered, makes for a truly unique triathlon to complete in under 24 hours.

As well as pushing the limits of the triathlon discipline to the extremes, the organisers also make an exceptional effort to minimise the environmental impact of the event, undertaking to replant trees in the local area and raise money for other green causes in the valley. Extreme means green too in Chamonix!

Free solo climbing is another of the extreme sports in Chamonix. As its name suggests, this style of climbing is free and solitary, and the climber doesn’t use any climbing equipment (rope, belay etc.), putting their total confidence in their own ability not to fall. In contrast to bouldering, solo climbing takes place above “safe” heights and therefore requires significant mental strength.

Of the important solo ascents which have been completed in Chamonix, here are two which took place close to the Mer de Glace:

Ice climbing does exactly what it says on the tin! Using ice axes and crampons, you’ll ascend frozen waterfalls or other ice formations, and winter offers the perfect conditions for this extreme sport in Chamonix.

The sport was born in the 1970s and requires plenty of experience including mountaineering, to evaluate the condition of the ice and the temperature – too hot or cold and you run the risk of your climbing wall collapsing or melting underneath you.

Many guides in Chamonix offer introductions to ice climbing, so get in touch with our team if you’d like to try this during your next winter holiday.

Freeriding is the extreme sport in Chamonix par excellence – ski and snowboard lovers come from all over the world to experience the off-piste of our valley. Chamonix’s back-country is an almost infinite playground, on the bucket list of all serious freeriders, which is also why it has regularly featured on the Freeride World Tour.

In its purest form, freeride skiing and snowboarding take place beyond the secured areas of the mountain, and of course off-piste, ideally on untracked sections of the mountain. The risks associated with falling or avalanches are therefore higher, and the adrenaline rush is as big as it can be when a line is successfully skied. In Chamonix, Aurélien Ducroz is our local freeride hero, thanks to his several world titles – keep your eyes peeled for him around town!

The joy of exploring extreme sports in Chamonix is that many of them are accessible to lower levels too, so you can get a taste of one of the activities mentioned above even if you’re a beginner. Check out our winter activities and summer activities for more inspiration of what you can get involved in while you’re visiting!