Last weekend, Chamonix celebrated the Europe-wide “Journées du Patrimoine” (Heritage Days) with some great local events. The town was host to the annual “Combat des Reines” – the Battle of the Queens – a traditional event which brings together dairy farmers from around the Espace Mont Blanc and three countries – Italy, Switzerland and France. In addition to that, the Compagnie du Mont Blanc held free guided tours of the Montenvers train station in Chamonix, taking in the workshops and storage areas. Our Resort Manager, Kerry, went along to see what was going on. 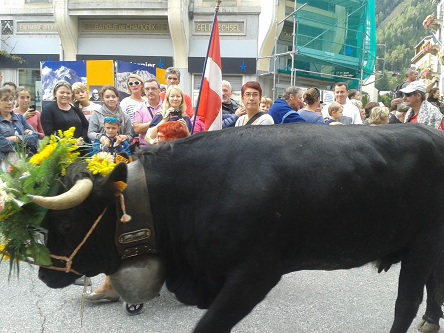 Saturday saw the arrival into Chamonix town centre of the various teams and their cows who would be competing on Sunday. Accompanied by musicians playing traditional instruments and dressed in traditional clothing, the cows were adorned with flowers and paraded through the streets of Chamonix.

On Sunday morning, the first rounds of battles began, with the heats, quarter-finals and semi-finals, organised by region. The crowd was buzzing, with plenty of stalls selling local produce and handicrafts – it was hard to keep away from the cheeses, sausages, hams and wine at every turn! This event brings people from around the Espace Mont Blanc (the Mont Blanc area), so there were also Italian and Swiss craftsmen and farmers selling their wares. 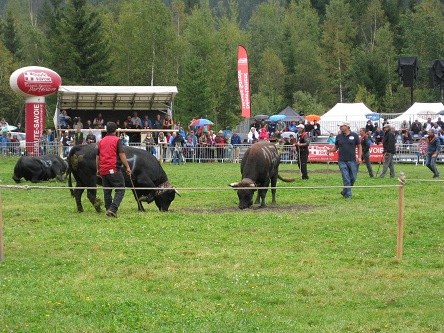 Cow-fighting is very different to bull-fighting, involving non-brutal scuffles between pairs of cows. There are no matadors provoking or enraging the cows and the cows’ horns are all checked before combat to ensure that they cannot inflict injury on another animal, meaning that injuries are rare and there is no bloodshed. During one “battle”, one of the cows sustained a small cut, and the vet was immediately called to assess if it was safe to continue. The tussles, where the cows lock horns, are part of the cows’ natural way of establishing hierarchy, although in the late morning, we were treated to one of the longest battles as two cows refused to engage in the fighting and insistently grazed in the paddock instead! International finals took place in the afternoon before the winner was crowned.

Over Saturday and Sunday, the Compagnie du Mont Blanc was also offering two free guided tours a day of the Montenvers train station. One of the mechanics, who has been working there for more than 30 years, took us on a tour of the workshops as well as the train “sheds” where machines are kept when they’re not in use. Our tour followed a chronological path, starting with one of the original steam-powered trains from the 1900s. 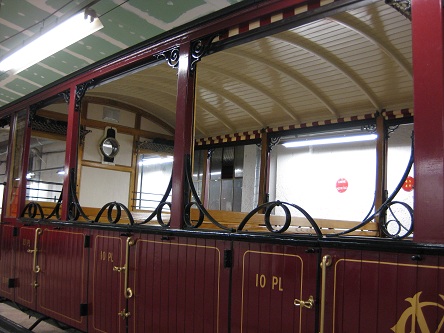 When these old-fashioned and beautiful trains were decommissioned, they were sold to a gentleman in Paris who wanted to make an attraction out of them. However, once he got them there, he realised that they had obviously been designed to travel up and down mountains, and were not adapted for movement on the flat, so the trains were put into storage for 25 years, after which time the CMB bought one back, dusted it off and had it lovingly restored in Sallanches in time for the 100th anniversary of the railway. These days, the train is still used on special occasions, such as on Thursdays in the summer.

It was great to see the different design and adaptations which have had to be made to the carriage for it to run safely today. While the first-class carriage was closed with windows, the second class carriage was open-sided and part of the restoration process included fitting trellises to the sides to make them safer, all in keeping with the original “feel” of the train. The second class carriage even had a section of bench which folded up out of the way – a feature with a slightly gruesome history, as originally this would have been where coffins would be stored on their way down the mountain after accidents at altitude, in the days before helicopters.

We then saw some of the newer electric trains from the 1950s and 1960s, which were bought after the installation of the electric line, moving away from the steam and then diesel which had powered the trains. There is one diesel engine which is still used every morning in the winter, when it heads up the tracks at 7am before the electric cables are turned on. The mechanics check for frozen cables and secure the line and if necessary they may also attach a snowplough to the front to clear the tracks of snow – a fearsome piece of machinery that you certainly wouldn’t want to bump into early in the morning.

Part of the tour took us underneath the engines and trailer carriages, where we were shown the safety features which stop the trains from losing control on the steep mountain tracks. These features include the brakes, which function in the opposite way to a car – pressure must be applied to release them rather than to engage them – as well as the ratchet system built into the cogs, which allows forward movement and blocks backward movement. 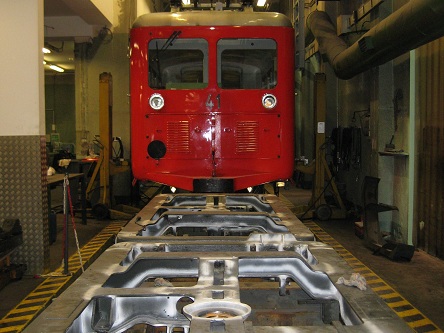 It was also interesting to hear about the maintenance checks which are carried out on the trains. Every machine receives an annual check-up, as well as being fully dismantled every 12 years. At this time, every single part is checked, repaired if needed, and then remounted. The CMB is largely self-sufficient in this respect, carrying out most of the work themselves in the workshops, with external experts then coming in to carry out additional safety checks. 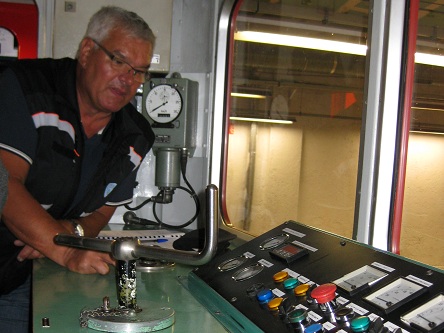