Summer Attractions in the Aosta Valley

Just a tunnel away the Aosta Valley awaits this summer loaded with gastronomy, history and activities too. We’ve made a list below of summer attractions in the Aosta valley, on the Italian side of Mont Blanc, in order of their distance from the French border. Starting with the closest ones at the top, make your way through ‘Valle d’Aosta’ this summer with Chamonix All Year…

Getting there: This cable car departs from the parking closest to the Tunnel du Mont Blanc at ‘Entreves’

Built at a cost of €110 million, the Skyway Monte Bianco cable car is a more futurist version of the Aiguille du Midi on the opposing side of the mountain. In the summer the two may even be inter-connected by way of the “Punta Helbronner” cable car. First you must start at 1,200m in a revolving glass pod to the first platform at 2,143m. Next, another cable car takes you to the upper viewing platform with an open terrace at 3,452m. From here competent alpine men and women set off for their day in the mountains, perhaps even headed back to France the hard way over the Glacier du Géant.

From this alpine perspective you could be privy to views of the Matterhorn, the ice-covered Monte Rosa and the spiked crest of Gran Paradiso. 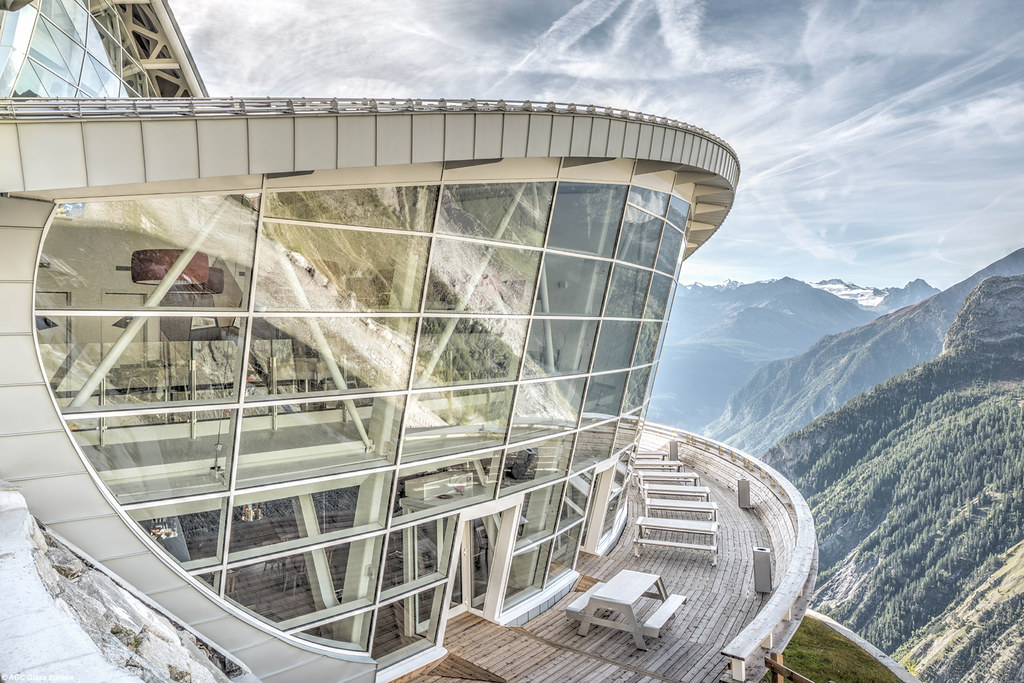 Getting there: Take the main cable car in July and August from central Courmayeur

Every summer the green pastures of Plan Checrouit beckon with an inviting proposal, a dip in the pool with water temperatures between 28 – 32 degrees under the watchful gaze of Mont Blanc. In addition to the pool (18m long, 1.60m deep) there is a sauna, sun terrace and changing rooms.

If you prefer a challenge worthy of the bar that also waits for you why not set out on foot up to this great altitude pool, it is around an hour’s hike from Courmayeur.

Getting there: From the tunnel exit into Italy take the SS26dir roughly 8km to the via de l’Ancien Casino turn off to Pré Saint Didier.

Fit for royalty, the nobility of Savoy frequented the thermal baths of Pré Saint Didier throughout the seventeenth century. Today the Italian brand QC Terme have made their mark on the site while preserving the last iterations of architectural improvements from the nineteenth-century. This is the Italian older sister of the QC Terme Chamonix spa.

The site boasts over 500sqm of spa services: hydro-massages, hydro jets, sauna, Turkish baths and of course outdoor baths overlooking Mont Blanc. In addition to all treatments you will be supplied with a bathrobe, towel, slippers and access to the buffet.

Tip: Relax under the stars every Friday and Saturday night in high season, when the baths are open until 11 pm, with romantic lighting from torches and candles. P.S No kids! 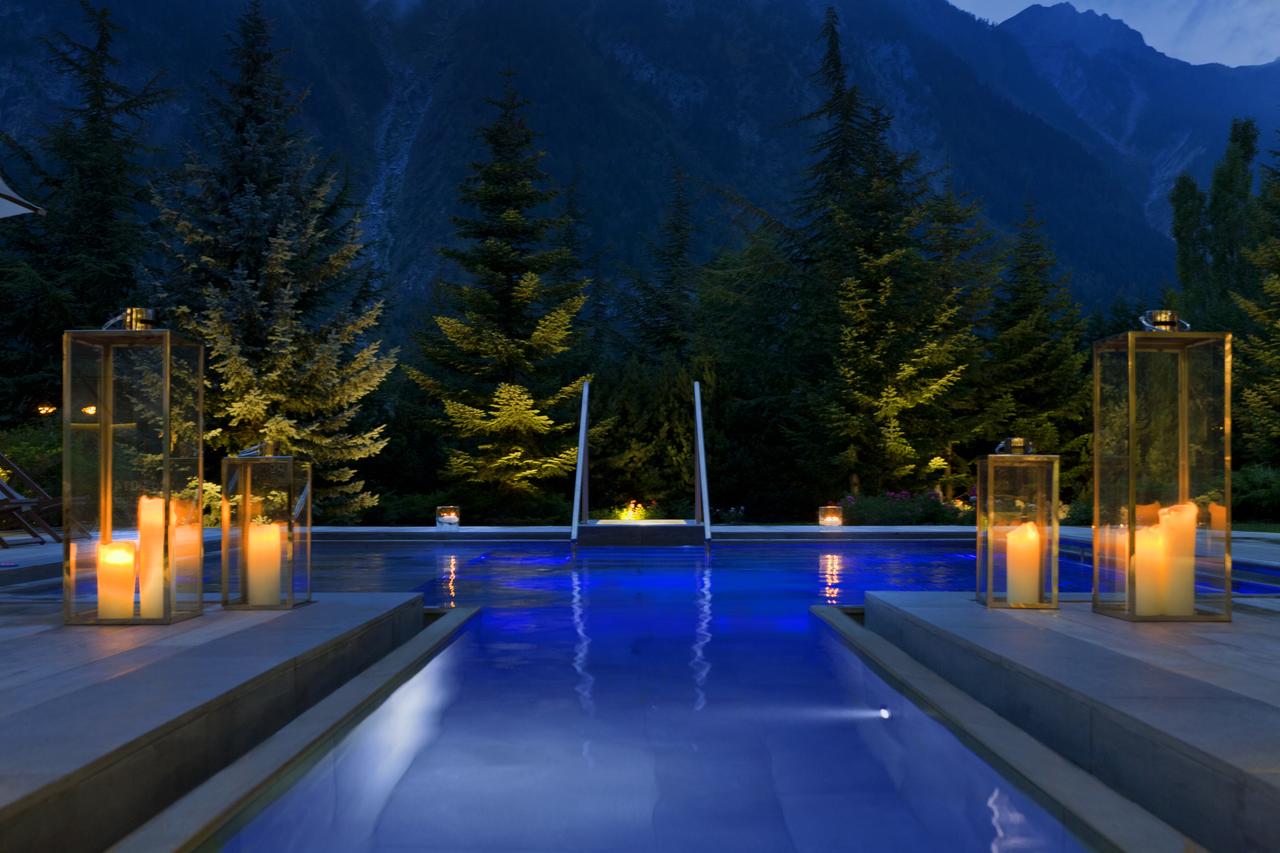 Getting there: Take the same route to the QC Terme, however continue along the winding national road another 5minutes until you reach the Parco Avventura (right after the first tunnel).

This impressive ravine is actually where the thermal spring of Pré Saint Didier originates from. In ravine an easy tourist route has been developed to run along the “Orrido” canyon. Dug into the rock the path is located at the foot of Mont Crammont. As you hike the cool breeze of the river Dora of Verney rushes past on your right-hand side.

From Pré-Saint-Didier, down in the valley, the itinerary starts in the vicinity of the ancient bridge over the stream Dora of Verney. Overcome the thermal spa of Pré-Saint-Didier, and after around 200 metres the path can be found on the right.

Read up about the hike online here before you go there to decide if the average 15% gradient is too much for little ones or the older grandparents who might be with you. This handy blog has more top easy hikes in the area here.

Tip: 160m above the path a panoramic walkway has been built to maximise the views over the gorge of the “Orrido di Pré-Saint-Didier” ravine. This curved bridge offers breath-taking views of the thermal spring cave and waterfall below.

Getting there: From the tunnel exit into Italy take the E25 for 30minutes before taking the exit titled “Aosta Ovest/Aosta Centro/Aoste Centro”

Surrounded by snow-capped mountains Aosta Town is the largest town and the capital of the Aosta Valley.. Aosta was once known as “Augusta Praetoria” and was inhabited by a Celtic-Ligurian population called the “Salassi” before becoming an important Roman defensive outpost in the 1st century BC, marking an important trade route that connected France and Italy. It is equipped with Roman villas, a forum, thermal baths and amphitheatre.

The present-day layout of the streets is the clearest example of Roman urban planning in Italy. It’s so Roman in fact that Italians consider it ‘the most Roman town after Rome’. The well-preserved Roman walls form a perfect rectangle around the town centre, and the formulaic town planning reflects its military stronghold history. 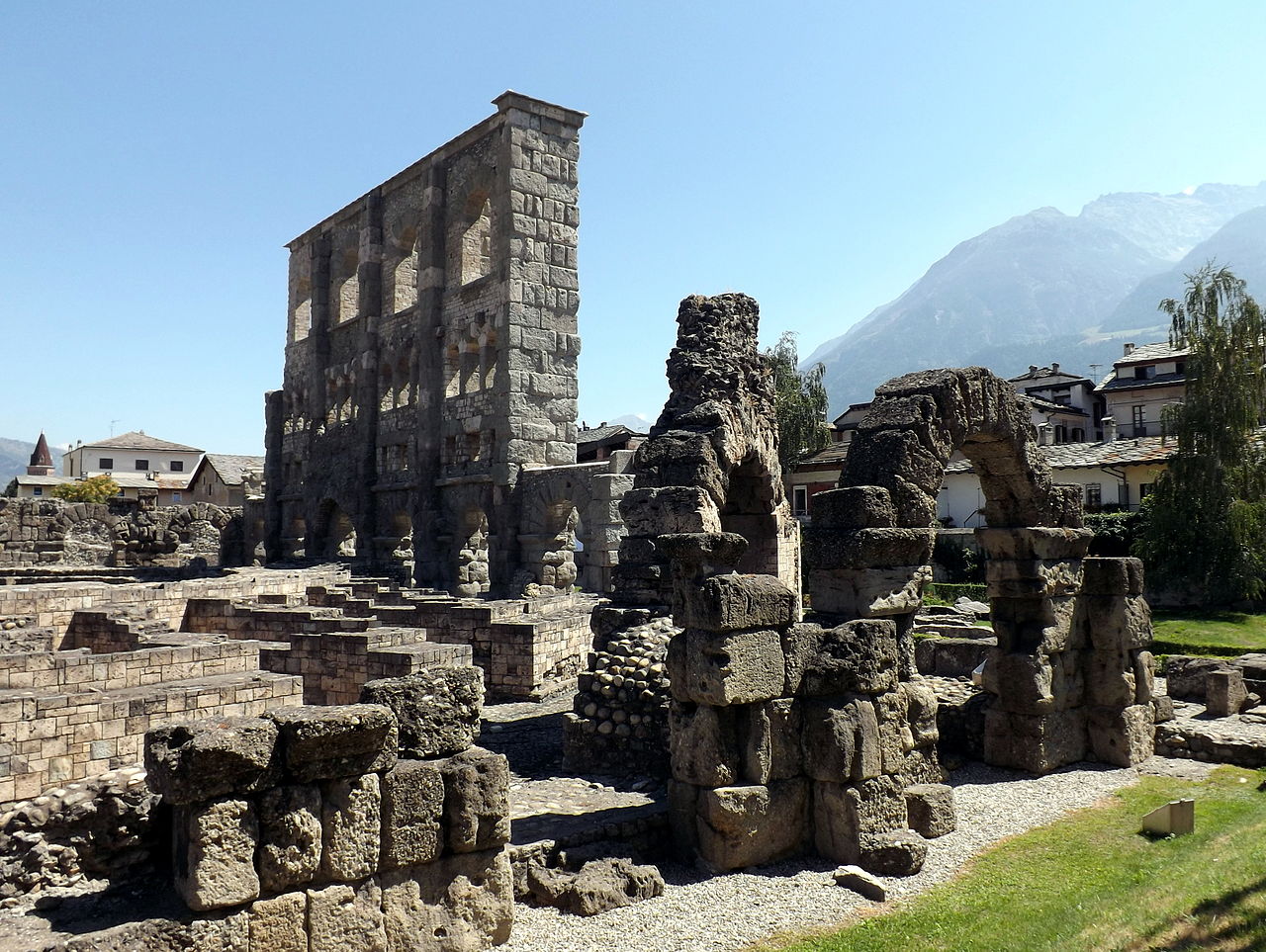 Getting there: Leave it up to us! We’ll pick you up from Chamonix and take you on the group tour to the town centre of Aosta and back again.

On our exclusive Italian wine & cheese tour day trip, the first stop is at one of the most important wineries of the region. Visit the vineyards and wine-production facilities while tasting three wines produced on site. Learn how red, white and sweet wines are individually produced, and how the soil shapes the flavour of the grapes which flourish in this area of Italy.

After this, you’ll have some free time to wander the ancient streets of Aosta and take some lunch ahead of our next rendezvous at ‘Stefano’s cheese shop and cave’; the legendary cheese tasting session awaits!

Tip: The Italian wine & cheese tour is available Monday-Saturday in Summer and Winter, however you will need to have a group of a minimum of 5 people. Advance booking is essential, the price is available on request as it changes depending on the group size and transport requirements – Book here.

Getting there: The Observatory is located in Saint Barthelemy, above village of Lignan at 1,600m. From Aoste drive 30km into the mountains above.

Opened in 2003, the Regional Astronomical Observatory is open to the public for visits and direct observations. Home to an 810mm telescope, the observatory provides astronomy enthusiasts with the tools to observe various celestial bodies, while for the less experienced, guided tours and observations are possible. There are two permanent internal exhibitions about the path of planets and our solar system.

Tip: Nearby you can also discover an iron age castle, ancient mines of magnetite and manganese, as well as typical rural alpine architecture; great views for that family photo shoot!

Getting there: This is a one-hour drive from the Italian side of the tunnel du Mont Blanc on the E25 in the direction of Strada Statale 26.

The Bard Fortress is an imposing nineteenth-century fortress, now home to the regions ‘Alpine Museum’. As well as the history of the fort itself you can discover the geological, historical and anthropological DNA of the Alps in a modern museum setting. 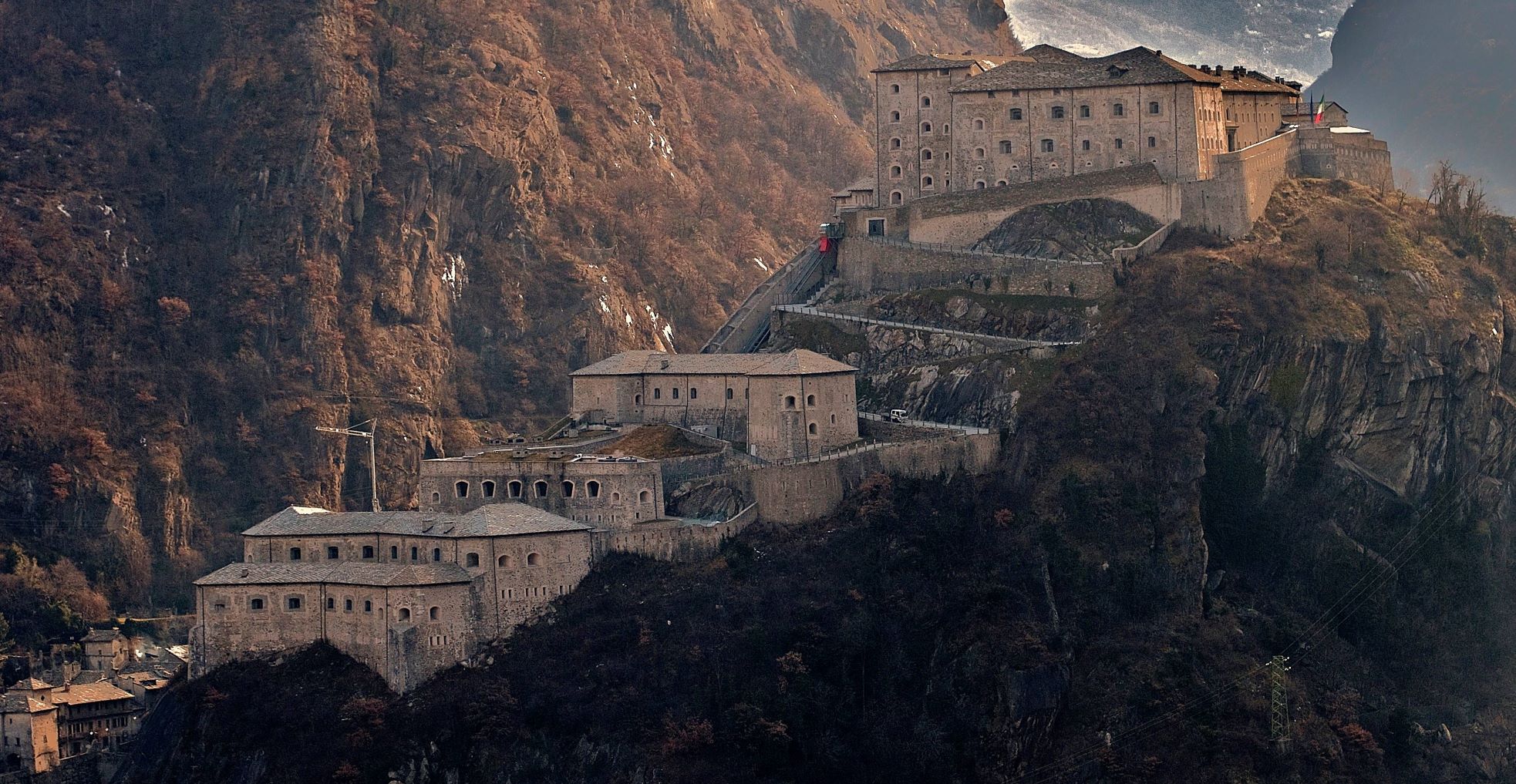 In Morgex a “barefooting” hiking track has been created as a sensory journey to experience the sensations, and hopefully the pleasure, of walking barefoot: More here.

For those who want a heart racing new experience…or to propose marriage to their other half 😉 we suggest you try a balloon trip in the skies of the Valle d’Aosta. The slow ambient flight is an exciting adventure with the most unforgettable views of the region and of the Alps: More here.

Castles of the Valley d’Aosta

In Val d’Aosta there are numerous castles, scattered throughout the regional territory offering a complete overview of medieval life and ancient architecture. From massive towers which date back to the beginning of the second millennium, to complex 15th century forts, and courtly residences of the early 16th century, the Valle d’Aosta can take you on a journey through the centuries.

This Wikipedia list of Italian castles is split into regions; the Aosta valley has 21 to discover. 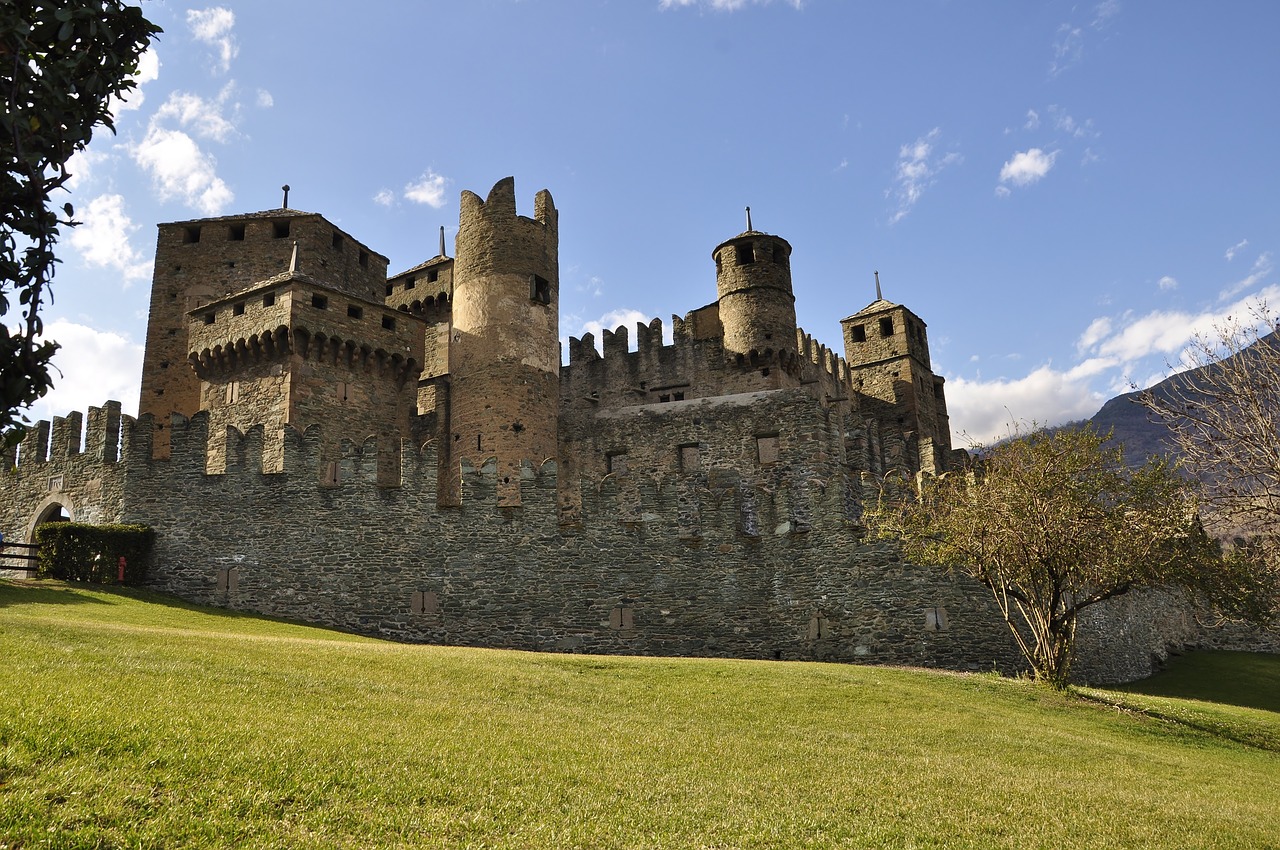