About the Chamonix Fête des Guides 2017 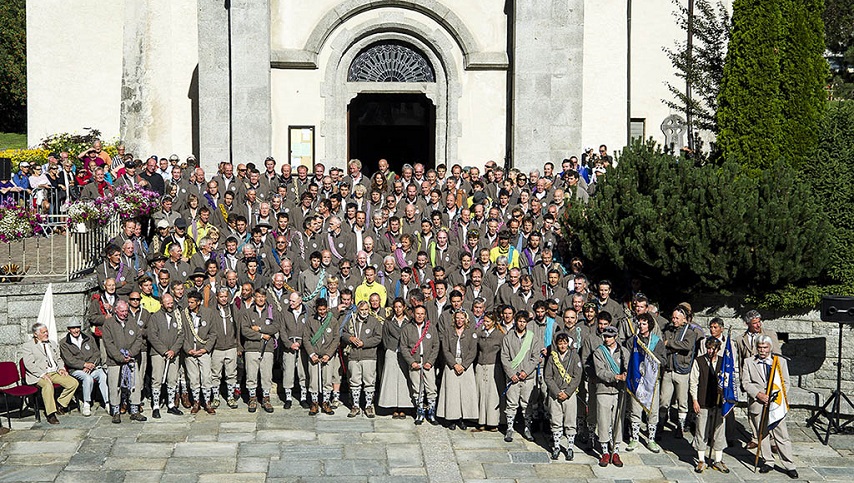 The Compagnie des Guides de Chamonix, one of the most important names in mountaineering, was founded in 1821. Every year the company both celebrates and grows its history at the traditional Fête des Guides (Guides’ Festival), as talented young guides are inducted and their rich past and present is on show. Held annually every August 15th, the Chamonix Fête des Guides 2017 owes its initial creation to the financial support of the ‘Caisse de Secours’, whose role is to assist all members of the company in the event of injuries or their families in the event of death.

Each year, hundreds of volunteers, guides and non-guides give their time and energy to the event in order to reap the maximum benefit for the fund. It’s a perfect project climaxing in shared histories, a show of support and financial aid for this great cause.

Rainy day for the #FêteDesGuides today in #chamonix. Like the traditional outfits that they wear, including these natty #socks. Photos taken at the blessing of the ice axes and ropes. #welovechamonix

Just as many visitors experience today upon gazing the Mont Blanc massif, Western civilisation as a whole experienced an Enlightenment by the end of the eighteenth century.  Fueled by poets, painters and philosophers like Lord Byron, Caspar David Friedrich and Jean-Jacques Rousseau, high society radically changed their attitude toward the mountains during this era.

The former domain of dragons and demons became the gateway to the Sublime. As they are today, the mountains came to be considered a place of exquisite beauty and alpine tourism was born.

Flocking to Chamonix to marvel at the mighty glaciers, especially the Mer de Glace, and the enormous Mont Blanc (the highest mountain in the European Alps), the upper and middle classes were easily out of their depths during the first half of the nineteenth century. With no experience in mountain hiking, let alone on ice, the gentlemen and ladies of London, Geneva, Paris and beyond relied on hiring local peasants to guide them; income which the local population likewise relied on:

Chamonix was visited by between two and three thousand tourists annually at the beginning of the nineteenth century, more local people could earn extra wages as some sort of mountain guide. The more challenging tours they provided were those towards (or on) the glaciers. The hardest excursion was the ascent of Mont Blanc, first summited in 1786 by Dr. Michel-Gabriel Paccard and Jacques Balmat, two local people from Chamonix (the latter hired by Horace Bénédict de Saussure from Geneva). The following year, de Saussure himself ascended Mont Blanc. This ascent meant another boost for tourism in Chamonix, which would eventually lead to the creation of the first professional organization for mountain guides: La Compagnie des Guides de Chamonix, in 1821. – historian Hans

As these mountain pilgrimages developed in the 19th century more accidents were recorded as access to the Alps also improved.

In the 1850s the French railways reached Basel and Geneva, the climbing centers Chamonix, Zermatt and Grindelwald were hardly more than a day’s journey from London and could be reached cheaply at a fare of ten pounds. Setting up an expedition with five porters and three guides in 1855 two Londoners had to pay only four pounds each. – Historian Hans

One such accident in 1820 triggered the need for local rules which would form the basis of the Compagnie des Guides de Chamonix. Known as the Hamel accident, on the slopes of Mont Blanc three local guides (including Pierre Balmat) perished in a crevasse thirty-four years after Paccard and Balmat’s first ascent.

As we have seen lately in the press it’s not long before nature gives back her takings. Forty years following the accident when surviving guide Joseph-Marie Couttet was in his seventies, the Glacier des Bossons returned the men home. Objects along with body parts were able to be identified as those of the guides by Couttet.

The accident made it clear that in order to assure the quality of tourism in Chamonix, qualifications were essential for the safety of locals and visitors alike, and that the guides and their familles should be protected monetarily in the event of an accident. In addition to the required qualifications to act as a guide, the Compagnie des Guides also introduced the famous tour de rôle: a rotation system in which all guides had the same opportunity to guide the bigger “pay day” circuits to the Mont Blanc, Aiguille du Midi and elsewhere. It was also the company who decided on the number of guides a tourist was obliged to hire for equal risk, equal opportunity and equally fixed prices.

A summit of tradition: Solidarity, from the origins

1820 The valley of Chamonix is under Sardinian administration. Above the great plateau, while en route to Mont Blanc, an avalanche costs the lives of the three guides Pierre Carrier, Pierre Balmat and Auguste Tairraz. Collections are made for the families of the victims. The King grants pensions to the victims’ familles.

1821 Compagnie des Guides de Chamonix is officially established, with one of its founding pillars, a solidarity fund. Each guide contributes to feed this fund and aids can be allocated, in the interests of fairness, according to each case.

1863 Savoy passed under French administration. Creation of a society of mutual aid. Its purpose is “to provide medical care and medicines to sick members, to pay them compensation during the period of their illness, to provide for their funeral expenses.”

At the beginning of the twentieth century, contributions were no longer sufficient to feed this fund. Hence the idea of organizing a great festival:

1924 Creation of the emergency fund. The first party is inaugurated by Madame Coty, wife of the famous perfumer:

If Saint Bernard is the patron of mountaineers, it is the virgin who, from the top of the summits, watches over the guides and their clients.

The festival is therefore organized traditionally on 15th August, Assumption Day, in honor of Mary whose statue can be found on many of the great alpine peaks and to whom Mont Blanc is traditionally dedicated.

Join the spirit of history and support our Chamonix guides at this major annual event. Showing your appreciation for the service of the amazing certified mountain men, and women, of Chamonix and the Caisse des Secours.